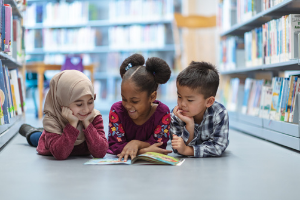 Celebrate Black History Month with stories highlighting strong African-American characters overcoming racial inequality and discrimination.  Follow the lives and experiences of these courageous characters and authors as they share their moving stories.

The Hate U Give

16-year-old Starr Carter divides her time between the poor neighborhood where she lives and the fancy prep school she attends in the suburbs. When Starr is the sole witness in the shooting death of her best friend, Khalil, she is thrown into the world of police brutality and the legal system.  Starr must fight for the truth to emerge after the events that follow Khalil’s death.

In a poetic memoir by Jacqueline Woodson, Brown Girl Dreaming, recounts what it was like to grow up as an African American during the time of Jim Crow laws and the Civil Rights movement in the 1960s and 1970s. Set in both South Carolina and New York, Woodson shares her positive and negative experiences that shaped her.  Despite the world around her, Woodson finds her voice through writing stories and exploring her love for writing.

Based on a true story, Hidden Figures details the story of four of NASA’s African-American female mathematicians and their contributions to America’s space program.  Working at Langley Memorial Aeronautical Lab in Virginia, Dorothy Vaughan, Mary Jackson, Katherine Johnson, and Christine Darden must overcome racial and gender inequality and discrimination to become major achievers in mathematics, science, and engineering.

I Have A Dream

Dr. Martin Luther King Jr. delivered his famous “I Have A Dream” speech on the steps of the Lincoln Memorial during the 1963 March on Washington. Celebrate and remember his words and legacy in this powerful reminder of his dream to have freedom, equality, and peace among all people.

I Know Why the Caged Bird Sings

In her autobiography, Angelou describes her early years from  the age of three to seventeen. During this time, Maya and her older brother Bailey, are sent to live with their grandparents in Stamps, Arkansas. While there, the two endure relentless racism and are soon moved to San Francisco, California to be protected from the racism. Throughout the book, Maya finds her identity and learns how strength and a love of literature help with overcoming racism, abuse, and literacy.

This Newberry Award winning novel follows 10-year-old orphan Bud Calloway. Bud is living in Flint, Michigan with the Amoses, his third foster family. Bud decides to run away to find a better home and musician, Herman E. Calloway, who he believes is his father. With the help of friends along the way, he finds his way to Calloway, and the two uncover the truth together.

This Caldecott Honor novel follows Henry Brown, a slave living in the South pre-Civil War. He doesn’t know his age or the location of his family. When he is old enough, he marries, only to have his family taken from him and sold at the slave market. When Henry comes across a crate at the warehouse where he is working, he plans for his escape to the North– he will mail himself!

Read along and see the story of Rosa Parks’ historic refusal to give up her seat on the bus in Montgomery, AL. Connect with Rosa as you read along and feel her emotions throughout the event and eventually her arrest.

The Warmth of Other Suns

The Warmth of Other Suns tells the story of The Great Migration from 1915 to 1970. Over six million southern African Americans fled the South to the North to escape oppressive economic conditions that offered little to no form of advancement. Read about the stories of Ida Mae Gladney, Robert Foster, and George Starling whose lives were forever changed by their courage to move.

Their Eyes Were Watching God

Janie Crawford, a mixed-race girl, is obsessed with finding love. Through her three marriages, Janie finds emotional and physical growth that leads to self-actualization. Their Eyes Were Watching God uncovers themes of gender, race, and love in this emotional adult novel.

Let us know other books to read for Black History Month. What activities do you use along with the books? Comment below!

The Damaging Effects of Toxic Positivity

The Emphasis on Learning Recovery

How to Incorporate Social Emotional Learning in Your Classroom

Phone or email us for online orders that are less than 25. Please press the SUBMIT ORDER only once. Thank you. Dismiss